The Renaming of the EPISD Planetarium

In 2001, EPISD renamed the planetarium after the famous El Pasoan, Gene Roddenberry. He was born in the Sun City in 1921, he was a radio man on bombers in World War 2 and then became a famouse Hollywood screen writer. He's famous for creating Star Trek. "Star Trek kind of has a special place in the American culture and in fact one of the examples of that is in the Smithsonian Space Museum, there's only one fictional thing in the entire museum and that fictional thing is the Starship Enterprise.  Todays generation don't even know so many sayings and so many things that we do that actually came from Star Trek just like so many of our words in english that came from Shakespeare  hundreds of years ago.  Star Trek has also added to our culture so it's a cultural icon, and that's one of the reasons why we named it Gene Roddenberry. He was also a futurist and he had a very positive out look of the future. He did his thing back in the 1960's, the 1960's was a pretty rough time, there were riots about race, so much racial discrimination, and discrimination against women and many other things, that are starting to go away now slowly  or we are working on it and it's a good thing, but now we are getting away with that stuff. In the 1960's Gene Roddenberry invented the Starship he had crew members from all over the world, all cultures, back then our enemies were the Russians and the navigator of the ship was a Russian, one of the officers of the bridge was not only a woman but she was a black woman, back in the 1960's it was controversial and now it's whatever, and he saw this a future  where people could work together and live together in peace, and all this bad stuff didn't have to be, so that's another reason why we named it after Gene Roddenberry." explained Cory Stone. "He lived four and a half miles from here,"said Cory Stone. He died October 24,1991.
In the ceremony Eugene W. Roddenberry Jr. cut the ribbon for the grand renaming. The rules on renaming the planetarium were that "we had to agree to always teach science truthfully, and we always had to make sure not to charge money for what we do, we don't charge the schools or the public to view and learn  about the universe." explained Cory Stone. "Gene Roddenberry had a saying that said the universe is free and is there for all of us to enjoy."  But of course Gene Roddenberry Planetarium did not recieve any type of compensation for renaming the  planetarium. 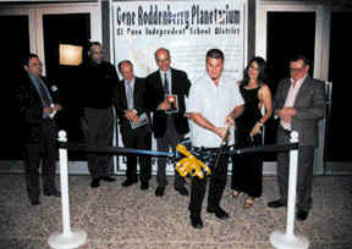 The grand renaming of the Gene Roddenberry Planetarium.